In 2008, I was all of 22 and editing a magazine on the Central Coast – a desperate attempt to start a street press for the neglected urban corridor between Sydney and Newcastle. For the second issue, I lined up an interview with the poet Robert Adamson, sitting in his home on the Hawkesbury River. At the time of the interview, Adamson had just published The Golden Bird – a collection of new and selected poems – which would win him the CJ Dennis Prize for Poetry in the Victorian Premier's Literary Awards in 2009.

We spoke on the phone for close to two hours. I pushed to interview him because I had just read his autobiography Inside Out and had been awed that here was this book that was about the suburbs I grew up around that, despite their proximity to Sydney, had rarely rated a mention in the pages of Australian literature. Unfortunately, the magazine folded before the interview ran – I hadn’t even had the chance to pull out the quotes I had secured from a more-than-generous Adamson.

Hearing of Robert’s recent terminal cancer diagnosis through the social media account of his partner, the Hungarian-born photographer, Juno Gemes – and that doctors at St Vincent’s Hospital had given him only weeks to live – I pulled out the file and found material I had long felt guilty to have let sit. The document opened with the only paragraph that I had written for the interview, which attempted to sum up my affections for Adamson’s memoir:

When I first read Robert Adamson’s autobiography Inside Out I was travelling on the train to Sydney from Wyong, going past the Hawkesbury where Adamson has spent most of his life. That area was beautifully detailed in the book, and to look up from it’s pages and see the land and water described was such a moving experience. Later I visited the house of the potter Jane Barrow, a friend of the family. Adamson’s book sat beneath a window. The red cover stood out in the low afternoon light. I mumbled that I had read it earlier in the year. We walked down to the water and sat on rocks. I looked up and could see, for the first time, where the trains moved across the water. It was like looking at yourself from a distance. I was inside out.

What remained below this half-formed introductory note was a series of raw quotes. I was no skilled journalist, so most of the quotes were incomplete. I didn’t know shorthand and I hadn’t even transcribed the questions I was asking Robert. With no record of what I was asking him, reading back meant that his voice simply flowed on, and so what I read was not so much the scrambled jottings of an inexperienced journalist, but a poem – a long, autobiographical sketch, partly in the Adamson register. How could it not be, it was his voice, after all? We spoke of the poet Peter Minter, the painter Brett Whitely and, of course, Adamson’s forever lodestar, Bob Dylan.

There will be many remembrances of Robert as news of his diagnosis travels around the world, this one just happened to come ready-made – down a phone line fourteen years ago, sitting in a vault for all that time, waiting to be set free.

I grew up at Neutral Bay… inner harbour beaches, between there and the Hawkesbury. The actual place – when I was going through the most horrendous things – I would be physically be soothed by it – my head would get unscrambled by being at places from my childhood –

The Hawkesbury. Even when I wasn’t there

It’s interesting to go back to those early days, they still have as much as they ever did, hammer them home –

Peter Minter, knew the later Dylan, rather than the earlier stuff – Blonde on Blonde, my mum was a Dylan fan.

He [Dylan] seems to transcend the generation barriers,

Ginsberg when I met him, he was singing songs, a harmonium with Bob Dylan.

I couldn’t believe it… they were better.

They were set up

I didn’t get to appreciate Ginsberg, he gave me Robert Duncan…

all the things he said, I didn’t appreciate them until a year later…

Me and Peter went fishing, St. Augustine, 4am

It’s interesting because that book [Inside Out] had such a lot of publicity, it didn’t occur to me that a lot of those people like fisherman wouldn’t read it –

You don’t know how connected you are to a book

An autobiography… a lot more people are going to see it.

Some of those people you are liable to.

I’ve met some fishermen who will read poetry,

Come from it from all different ways,

My mother was a bible basher, quoting all the time, Tennyson…

It gives you a role model… shows you it’s possible…

The first year writing poetry, for me, was Dylan.

He was in America, no chance of meeting him.

Brett Whitely loved him too.

Soon as I read that Brett adored Dylan, I went and saw one of his shows in Paddington. I was only twenty-four, never been to an art gallery, just read it in the newspaper. Brett was the showing of Alchemy, all about Rimbaud and Dylan, and I just thought far out, and it was like going into another world. I saw him, and recognised him from the photographs. I said something about Rimbaud, and he dismissed me, then he came back and asked ‘What did you say?’

We became best friends through that connection with Dylan –

With Brett I used to think he was older than me and done all these things.

Poetry can never do what painting can… I used to just copy.

That local factor again, it was more real to me than Dylan,

He was walking around the same suburb with me.

Steve Hoy and the Hoy Boys –

I used to think when I was younger – doing my first and second book – I really loved Wallace Stevens, the imagination – the one reality in this world, something purely imagined was much more real.

I started to see that writing things that actually happened to me, that could be as powerful as something that is imagined.

It’s the way that it is written rather than the subject matter – the matter of my life – to concentrate on the craft, making it sing

I was twenty-four when I got out of prison – and I had sense of achievement in making a wedding cake. Study it like you can study sonnets, the infinite possibilities of – acts of the imagination, acts of poetry – then there are pastry chefs put their whole being into the cakes – and I realised too, that act of creating, that’s my first poem.

I sensed this creative act in making the wedding cake a shade of blue.

They used to give these creative composition classes… come back on a Friday, the teacher would say, ‘What happened to you on the weekend?’

I’d been to the Hawkesbury, my father… drunk… I was too ashamed to mention it, compared to their stories. I’d make up these really ordinary things.

Writing one of those when I was pissed on gin, putting bets on the shop, imagine how that would go down at Neutral Bay?

I was writing these really complex poems, when I was about twenty-six, versions of Rimbaud, Mallarme, symbolist drug poems.

I was hanging out Michael Dransfield, we were on smack all the time, took acid, connected to the universe, went back to school wrote these end of the trip, wrote these little poems, relive them in the acid trip.

After the experience of Inside Out, I did a tour of America when I published The Goldfinched of Baghdad

I didn’t know what they would like, so I started off by reading Hawkesbury poems.

They responded more to the poems about fishing, which blew my mind, in New York, Chicago, as well as down south, Tennessee

They loved those – the commercial fishing, the tough poems about the Hawksbury –

It’s because that they’re a world stepped in the local, they became universal

People have a version of that in their life, they’ve done things that somehow connect to those poems

I got this email, by a professor in Chicago, philosopher, ‘Fuck this guy’s got a P.h.D. how can he relate?’

If I ever travel I’ll be reading the poems

Those poems in the beginning –

all those poems about the Hawkesbury

the prawns will eat you when you die,

those were the stories.

Sam Twyford-Moore is the author of The Rapids: Ways of Looking at Mania (NewSouth 18, and University of Toronto Press 20). A new book - Cast Mates - is due 2023.
You can email him sam dot twyfordmoore @ gmail dot com 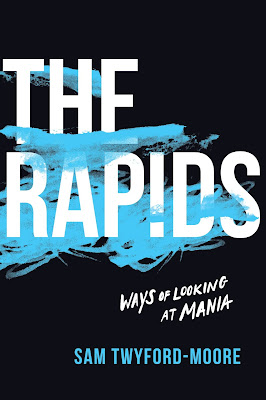 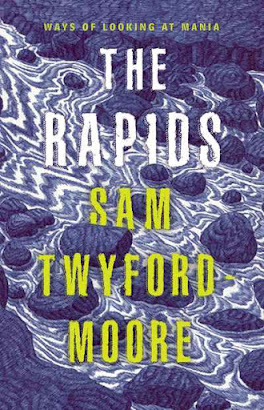 Praise for The Rapids.

Sam Twyford-Moore’s The Rapids is a harrowing and thoughtful exploration of all the crap that makes us human.

Michael Sala, author of The Restorer

Bright, warm and charmingly discursive, Sam examines his own mania by the bright lights of pop culture. He's witty and honest but judiciously wary of our culture of confession.

The Rapids is beautifully written: brimming with humour, empathy, pathos and heart.
This book is an earnest, generous, and important contribution to ongoing global dialogue around mental health.

The Rapids is a remarkable book – intelligent, empathic and ethical. It offers a complex and astute account of mania and depression both as a cultural phenomenon and a personal experience, and is unafraid of looking at difficult and dark emotions and events. It is by turns heart-breaking and hilarious, cerebral and cheeky, and an incredibly important work.

The Rapids is the story of a writer making sense of mania, the world, and mania within the world. It is innovative, intelligent and sensitive; an important work of criticism, and a critical work of importance.

Kylie Maslen, author of Show Me Where It Hurts

The Rapids takes the reader by the hand and lays out the realities of mania, up close and personal – what it's like to wrestle with and how the brain navigates its swiftly tilting universe.

Anna Mehler Paperny, author of Hello I Want to Die Please Fix Me: Depression in the First Person

As with all great first-person works on mental health, Twyford-Moore’s The Rapids generously weaves his experience of mania through his critical scholarship without purporting to offer any sort of final, clinical clarity. Twyford-Moore’s work – at once critical, personal, and historical – thrusts our misconceptions of mania against the rocks, casting both light and shadow: revealing shapes where there was once mystery, and placing mystery back where shapes once stood.

An important work, The Rapids is about what it means to write and represent madness across media, such as film and literary critique, and how we come to know ourselves through these media, and how they in turn come to inform our understandings of our own experiences of madness, both in constrictive and constructive ways.

The Rapids is a beautiful narration of the beauty and heartache inherent in madness. A humorous and considerate self-reflection on the way our private worlds are inextricably informed and vulnerable to culture, art and music. A personal account and generous contribution to the expanding experiential and scholarly work of Mad studies.